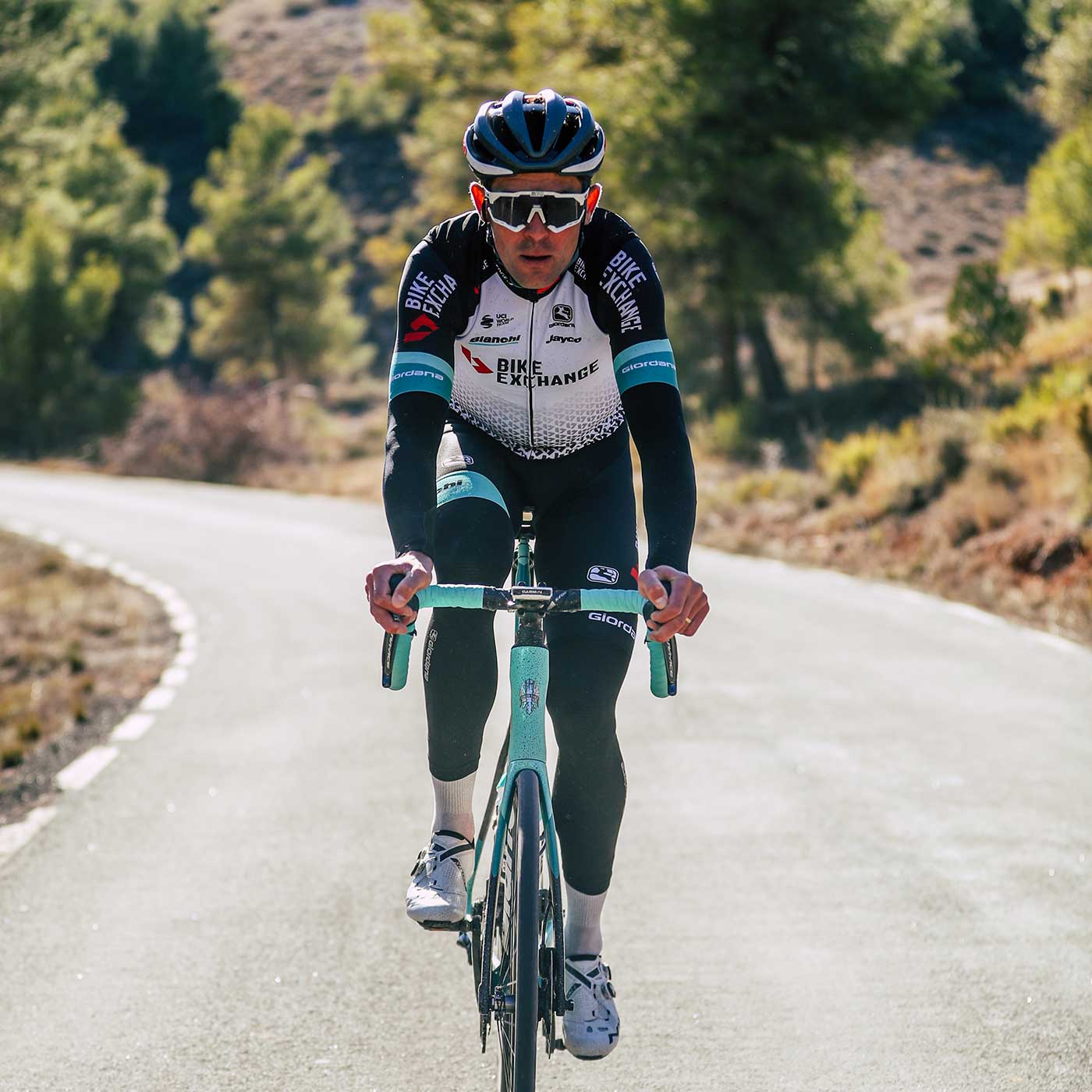 A “crazy idea” and hard work set Otago alumnus Jack Bauer on the road to becoming a professional cyclist. And, in spite of the obstacles of a global pandemic, he’s not finished yet.

Even though COVID-19 means he’s been confined to his home in Spain for weeks on end, top road cyclist Jack Bauer isn’t fazed by the upheaval to his normal schedule.

It’s early evening at his home in Girona, 100km up the coast from Barcelona, which he shares with his Australian wife Sarah and their one-year-old daughter Eve. He’s not long finished a “very strange” pro-cycling season, including the Tour Down Under, the Tour de France and the one-day Northern Classics, and is back home hibernating in the Spanish winter.

During the Zoom interview, his calm approach to the chaos of the past year suggests an easy-going nature – but he says this is only half the story.

“I probably have two personalities. I have a racing personality when I’m on the road, and then I have a side to me where I completely pull away from that when I’m home, and I’m quite happy out in the middle of nowhere stacking wood, just doing simple things like I did as a youngster.”

That youngster grew up in Golden Bay, Tasman, dreaming of an Olympic future in mountain biking.

“I think I’m a bit of a dreamer when it comes to what my potential might be. I set my sights on things way in the distance and most of them definitely do not come true, but the bike is one that has.”

Jack’s parents encouraged him in his sport and he and his brother and sisters were raised as “pretty no-nonsense kids”, which he says has helped him keep a balance between his personal and professional lives, and to cope with the pressures of the sport.

He left Golden Bay for university in 2003, spending four years at Otago and graduating with a BPhEd.

“It was a truly eye-opening experience. I’d moved there as a 17-year-old kid who’d been home-schooled in Golden Bay my entire life. I definitely saw it as jumping in the deep end, which I did. It was a life-changing experience, but obviously it set me on the right path.”

While at Otago, he especially enjoyed exercise physiology, taught by Professor James Cotter. “That was really where my passion lay, studying how the body worked and what high performance sport was all about: what the body could do when it was pushed to its limits.”

At the time, master’s student Nicholas Flyger was looking into the sport of cycling and Jack became “a bit of a lab rat” for him.

“He took me under his wing and said, ‘look, the performances you’re turning out in the lab on the ergometer are pretty impressive and maybe you need to back yourself as a cyclist’.”

Nick helped him gain some local sponsorship, developed training programmes and set up a mountain-biking team of students. Jack competed nationally during his time at Otago.

“That was really the beginning for me. To have that guidance and belief from Nick set me on the right path and kept me focused on this crazy idea that I had. He made it seem not quite so crazy, because this guy who knew a lot about physiology and sports performance thought I might have an engine under the hood.”

After Otago, Jack spent a couple of years working in the gym industry, but decided he’d rather be the athlete being trained than the trainer, and began to focus on road cycling.

“I’d always struggled to train on a full-time basis and pay my rent and pay off my student loan. I’d moved to Wellington to play bass with a band we had formed at Otago and saw an opportunity to be a cycle courier. I thought if I can be a bike messenger, that would allow me to pedal full-time and that if I could handle being on my bike all day, seven days a week, then maybe I could handle being a professional one day too.

“So I did that for a year. It seems strange to a lot of people: I was leaving my university studies behind and I had this wild dream that I’d go over to Europe and somehow become a cyclist who is being paid to do what he loved.”

In the middle of 2009 he moved to Ghent, in Belgium, and turned up to local amateur races. After a successful six months he picked up a single-year contract for 2010 with Scottish 3rd division team Endura Racing and moved to Manchester. In early January of that year, he won the 2010 New Zealand National Road Race Championship.

In 2011 he moved to Spain because he had heard the sun shone a lot more there compared to Manchester, and he knew one or two other professional Kiwi cyclists who were living in the region.

“I made friends, met my wife and I haven’t left since; it was 10 years in February.”

His wife Sarah represented Australia in track cycling, with Senior and Junior World Champion titles in the team pursuit and two World Cup gold medals. She retired in 2012 and has since gained a degree in sustainable development and international aid and is currently a self-employed artist.

“I think having someone else in the house who understands sport, but isn’t a full-time sports person helps to bring you back down to earth.”

“It seems strange to a lot of people: I was leaving my university studies behind and I had this wild dream that I’d go over to Europe and somehow become a cyclist who is being paid to do what he loved.”

In 2012 Jack signed his first contract into the pro-tour with team Garmin-Cervelo, which he stayed with until 2016. A standout performance on the 15th stage of 2014 Tour de France saw him come within metres of delivering New Zealand’s first individual stage win in the race.

Since 2018 he has raced with Australian World Tour outfit GreenEDGE. The team’s head sports director Matt White recently described Jack as a great part of their engine room and a big cog in the success of the team. Seems like Nick Flyger was onto something all those years ago at Otago.

Jack has an impressive CV of stage wins and placings in European racing, including a 4th in the Tour de France Stage 3 (TTT) in 2018 and a 1st in the Tour de Czech Stage 1 2020 (TTT). He also won the New Zealand National Championships Road Race (TT) in 2017.

His favourite race is definitely the Tour de France – “it’s something that’ s incomparable to other events”.

Typically, his cycling season runs from January to September or October, but in 2020 they had the rug pulled out from under them in March. He made it home from racing and proceeded to train inside on the home trainer during lockdown.

When it’s racing season, he would usually train five days out of seven. He uploads all his training data to his coach, who creates the programmes. Nutrition-wise he just likes to eat healthily.

“At a race and when I’m on tour with the squad I’ll work with the nutritionist, but at home it’s just me and my bathroom scales, because cycling’s all about weight – how much you weigh and how much power you can produce.”

He finds the most challenging part of being a professional cyclist is trying to be the best alongside others who are also trying to be the best. “You’re always on that tightrope of mental and physical pressure… I really thrive off that and I have a natural desire to push to the absolute limit.”

To prepare for that level of competition, he says you just have to do the training, whatever sport you do.

“You just get conditioned and hardened to that suffering. When it comes to doing a grand tour, a race of three weeks in duration, you definitely live on that knife edge – you’re at the peak of your physical capacity.”

He says the hardest thing to cope with is injury, because this means down-time on the couch, surgery and rehab. He had a bad break to his left leg in a crash on a wet road in the Tour de France in 2015. He still feels the effects from that and also has a “decent injury” to his other leg, which gives him trouble most days.

“The actual surgeries I went through with those injuries, they’d be the low points of my career; being laid up and getting drilled in and bashed about and stapled back together.”

In Europe, cyclists come through the junior rider programmes and onto national federation development teams, then early competition.

“Whereas I came through Otago Uni,” he says with a laugh. “I’m 35 now and in my 10th year as a professional, but I don’t feel like I’ve been around that long. I’m not losing that drive or motivation. Most people who’ve been doing it since 19 wouldn’t still be doing it at my age. But the majority of my life I’ve lived outside the cycling world.”

This means he has no qualms or fears about life outside sport, which a lot of athletes do.

“When that lifestyle is taken away from them – the support structure around them of coaching and the professional team environment, having everything laid out for you – a lot of athletes struggle. Relationships struggle. I don’t have any worries.”

Until then, however, there are still dreams to chase. “I’m still dreaming in terms of a major victory, a major race in cycling, I’ve had some small victories here and there – some nice wins – but nothing really standout. I’m looking at my final years on the bike and getting a bit long in the tooth, so let’s hope I’ll bag one soon.”