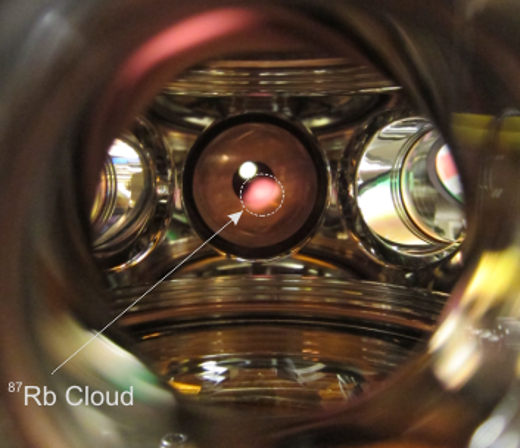 Our experiments revolve around an ultracold atom machine which can produce atomics gas samples at nanokelvin temperatures. At such low temperatures the behavior of particles are determined crucially by their quantum mechanical spin which can take either integer or half-integer values.
Integer spin particles are called bosons and half-integer spin particles are called fermions. Bosons and fermions have radically different quantum statics and using our machine we can produce both so-called Bose-Einstein condensates of Rb-87 atoms (integer spin)
as well as quantum degenerate fermi gases of K-40 atoms (half-integer spin). One thing we study in particular is what happens if we collide such ultracold clouds. We have recently implemented a collider based on powerful laser beams which are used to confine
and accelerate clouds of atoms.

We use laser light to manipulate and detect atoms in our experiment. For example, we are investigating the use of off-resonant light to probe the fragile, quantum mechanically superimposed, ultracold atoms in a non-destructive fashion. This has led to the development of new laser systems and optical instruments as a spin-off. We are extending the experience gained within our fundamental research program to the development of a laser based carbondioxide detector, which can be used for isotopic fingerprinting of organic material.