Gloves off for genetic research 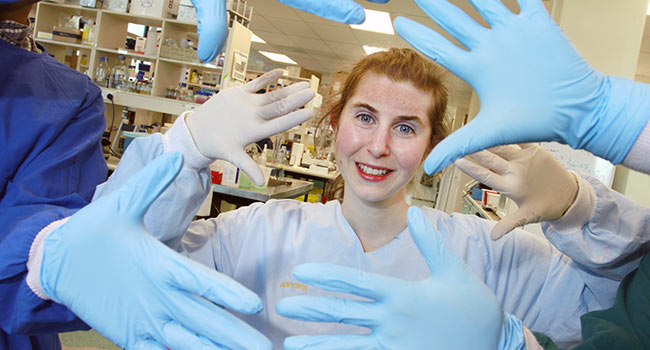 Grubby rubber gloves briefly brought Otago Master’s student Kim Hughes into the media spotlight last July – but the attention has not diverted her from her true genetic calling.

National and international media took notice when the Australasian Medical Journal published an Otago study showing that the non-sterile disposable gloves, used commonly in general hospital wards throughout New Zealand, are frequently contaminated with bacteria before coming into contact with patients. Poor glove box design and inadequate hand washing by hospital staff were found to be the likely causes.

“It was a really awesome project,” Kim says. “Going into the hospital and collecting the gloves from the wards... and what we found was quite surprising. The paper was published and just took off. It was really lovely seeing all our hard work actually getting credit.”

All the while Kim was also a Genetics Masters student working within the “fantastic” laboratory of Associate Professor Tony Merriman.

“Tony’s main research focus is rheumatism, particularly gout and serum urate. As a consequence, my Master’s topic involved seeing if serum urate has an effect on kidney function, adiposity (obesity) and stature. I was looking at causal relationships using a novel statistical method, Mendelian Randomisation, which incorporates genetic variants.”

Kim explains that the biological role of urate is widely debated. Increased urate is the central cause of gout and has been thought to be detrimental to metabolic and kidney function.

"I think previous research has been confounded by diet."

“(But) I found elevated serum urate had a positive effect on kidney function,” Kim says. “I think previous research has been confounded by diet. Sugary drink consumption is thought to detrimentally impact kidney function while concurrently elevating serum urate. My use of Mendelian Randomisation ‘unconfounded’ that relationship, shedding light on urate’s true role in the body.”

Kim only recently submitted her thesis, yet the Kidney International journal had already accepted a paper including aspects of her research.

Kim says, “I have been lucky having Tony and Heather as supervisors. They are more like friends or adopted family. Tony is out-of-this-world intelligent. He’s created a good atmosphere in his lab; the people in it are awesome. Heather has been a huge support for deciding what to do for my Masters.”

Off to a new job

Kim also credits Dr Brooks for helping her into the next phase of her career. At the start of September Kim took up a Molecular Genetics Scientist position in LabPLUS, at Auckland City Hospital.

“It is the field I wanted to eventually get a job in. I had been looking in Dunedin and nothing had come up. Dunedin is my home; I love this city - just ten minutes’ drive and you are in gorgeous scenery. But molecular diagnostics is quite hard to get into. People think it’s going to be the future and they want that job; genetics is such an enormous research field.

“I have never lived outside Dunedin before, it’s going to be huge.”