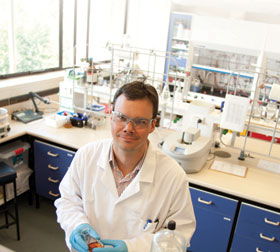 “We’re basically like engineers or architects, but rather than designing buildings, we’re designing molecules.”

Imagine a molecule-sized machine that could travel through the human body, carrying anti-cancer drugs directly to cancerous cells, without damaging any healthy tissue on the way. There’s a small problem with this scenario, of course: no one has ever been able to build such an intricate machine on such a miniscule scale.

Fortunately, small problems are Dr James Crowley’s specialty. The University of Otago Chemistry lecturer is currently working on pioneering research in the field of nanotechnology, which deals with the design and manufacture of machines on a scale of one ten thousandth of a millimetre.

James is hoping that his research team’s attempts to create a synthetic molecular machine capable of complex motor processes could set the stage for the development of radically advanced drug delivery systems, along with a wide range of other potential applications.

“Most drugs that kill cancer cells also kill perfectly healthy cells, which is why cancer patients suffer from so many nasty side effects,” he says. “So what we’d like to see is a machine that can transport the drug to the targeted area without it interfering with the rest of the body.”

Is such a machine within the realm of the possible? James is confident that it is, and refers to the trillions of natural molecular machines that make up our bodies as evidence to that effect. “Nature has certainly had a lot longer than we’ve had to come up with these fantastic designs,” he says. “But if nature can do it, then why can’t we?”

The creative potential inherent in chemistry is a major part of what James enjoys communicating to his students. “Chemistry is a great discipline for people who enjoy making things from scratch,” he says. “We’re basically like engineers or architects, but rather than designing buildings, we’re designing molecules.”