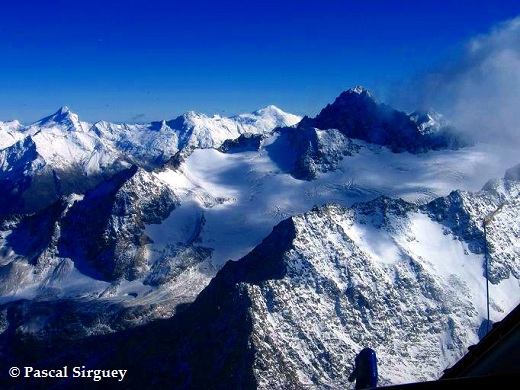 Remote sensing techniques have become appealing in research on glaciers as they mitigate many of the logistical problems associated with making in situ measurements. They also provide a synoptic view and historical record that is desirable to improve our understanding of glaciers behaviour and evolution.

The School of Surveying is actively involved in remote sensing of glaciers with a specific focus on the largest glacier in New Zealand: Tasman glacier. 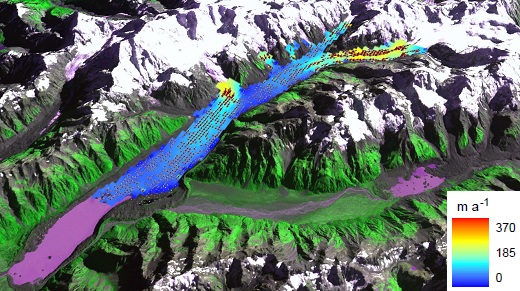 The results show two major units of flow, with an apparent disconnection between the upper Tasman and Hochstetter Glaciers. Furthermore, the high temporal resolution velocity record revealed marked oscillations between significant acceleration and deceleration of the glaciers surface flow. Analysis of climatic data suggests that observed velocity changes may be driven by climatic and hydrological forcing. 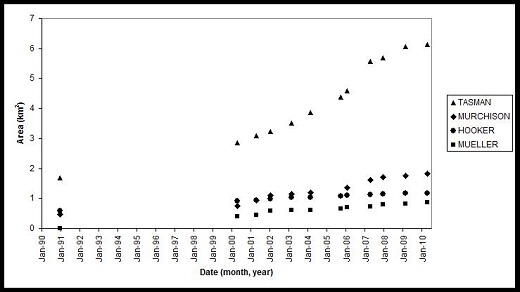 Debris-covered valley glaciers of the central Southern Alps, New Zealand, are undergoing rapid retreat following at least two centuries of near standstill. The current phase of rapid retreat is associated with the formation of large proglacial lakes at the glacier margins in recent decades. The historic record of the Tasman, Hooker, Mueller and Murchison glaciers was examined using Landsat and ASTER imagery to find the context for this current phase of rapid retreat. Examination of a twenty year sequence of remotely sensed imagery reveals the temporal and spatial patterns of glacier retreat. 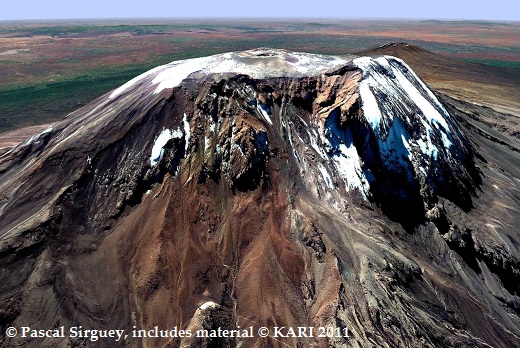 The glaciers of Kilimanjaro/Kibo have attracted interest for over a century. Since their first description following the ascent by Meyer (1889), their dramatic retreat has been characterized by numerous studies. While in situ observation and ground mapping have been originally used to map ice bodies over Kibo, remote sensing techniques via aerial photography/photogrammetry and satellite imagery have become the method of choice to update the glacier boundaries assessed by Meyer.

Images from Landsat, Quickbird, ASTER, and Kompsat satellites have been used to map of the dramatic retreat of glaciers on Kibo (Cullen et al. 2013). Check out the map and animation below that illustrate this retreat.

Download an interactive PDF animation of the glacier retreat on Kilimanjaro 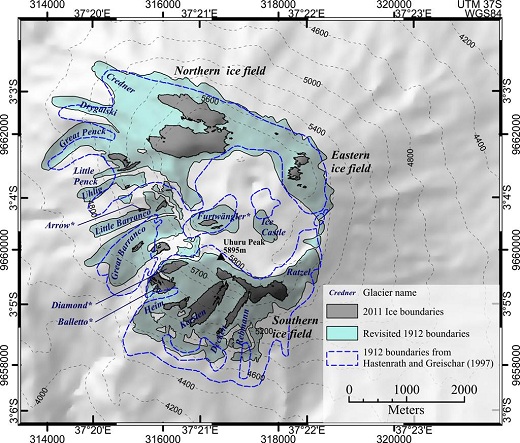 The photogrammetry strikes back (KILISoSDEM2012)

A hundred years after Klute and Oehler completed the first ground based photogrammetric survey of Kibo, and 50 years after the most recent aerial photogrammetric survey, we took advantage of the potential of spaceborne photogrammetric survey technique to map the topography of Kibo from GeoEye-1 stereo imagery (Sirguey & Cullen, 2013). This has led to the creation of a new 50cm resolution Digital Elevation Model (DEM), namely KILISoSDEM2012. New results showing that Credner Glacier could disappear by 2030 were presented at the AGU Fall Meeting 2013. This work was featured on LiveScience.com and over 15 science websites.

Performance Based Research Funding grant from the School of Suveying and Geography Department. 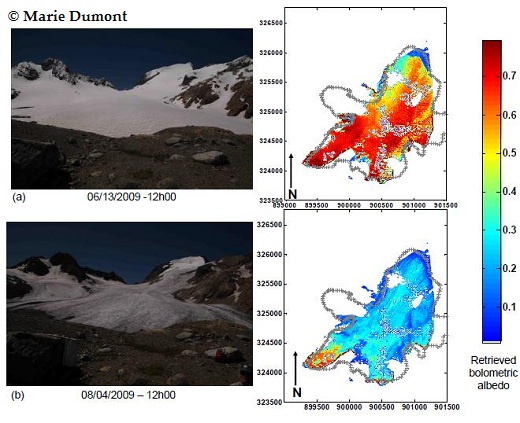 Defined as the reflected fraction of incident radiation over the whole solar spectrum, the surface broadband albedo is one of the most important variable in a glacier’s mass balance. This study presents a new method to retrieve the albedo of frozen surfaces from terrestrial photography at visible and near infrared wavelengths (Dumont et al., 2011). This method accounts for the anisotropic reflectance of snow and ice surfaces and uses a radiative transfer model for narrow-to-broadband conversion. The accuracy of the method was assessed using concomitant measurements of albedo during the summers 2008 and 2009 on Saint Sorlin Glacier (Grandes Rousses, France). Albedo retrieval has then been conducted from MODIS data and related to glacier mass balance (Dumont et al., 2012). Other parameters of the snowpack such as Snow Specific Surface Area (SSA) have can also be retrieved (Mary et al., 2013).