Antimony in the environment

Figure 1. Periodic Table showing the positions of arsenic (As) and antimony (Sb) in the same column.

Antimony (Sb) is a metallic element (actually a metalloid) like arsenic. Antimony sits immediately below arsenic in the periodic table, and has many of the same chemical properties. In particular antimony readily forms complex negatively charged ions with oxygen (oxyanions) in the environment. Antimony can be in the 3+ or 5+ oxidation state in these oxyanions, just like arsenic. As for arsenic, the 5+ oxidation state is the most common in the environment.

Antimony has been widely used in the past, for thousands of years, but nowadays it is increasingly viewed as being a toxic element, and considerably more care is taken when handling it. For example, recommended drinking water limits for antimony are very low (5-6 parts per billion, see Fig 2.), even lower than for arsenic. Antimony has no known use in biological tissue or processes, so ingestion of Sb is undesirable in any quantity.
More detailed information is available from the World Health Organisation 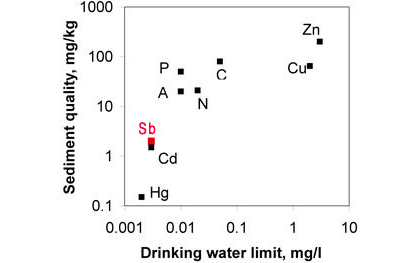 Figure 2. ANZECC drinking water and sediment limits for some "heavy metals". Antimony is considered to be one of the most toxic of the heavy metals, and therefore has lower limits than other metals except cadmium (Cd) and mercury (Hg).

Antimony was used in gold extraction and purification for thousands of years, and the antimony sulfide, stibnite (Sb2S3) was used in ancient times for cosmetic purposes.

Antimony in the environment

Most human exposure to antimony comes from interaction with materials containing Sb (see above). In particular, Sb can be leached from some metal plumbing fittings. Some water supply organisations recommend that people run a litre of water from their taps before using the water for drinking.

Antimony-bearing gases from plastic mattress covers have been implicated by some people in SIDS (cot-deaths) of babies. This remains controversial.

Natural sources of Sb in the environment include