The Origins and Adaptations of Mysticetes

Living baleen whales (suborder Mysticeti, in the mammalian order Cetacea) include the biggest animals to have lived. They are well adapted in terms of hydrodynamic, thermal and biological strategies to life in water. But, they retain some typically mammalian attributes which indicate a distant origin on land. These features include air-breathing, live birth, a 4-chambered heart, warm blood, and middle ear ossicles. Specialised feeding adaptations are particularly distinctive in mysticetes: they lack teeth, but use baleen to filter food (mainly zooplankton) from the water. Baleen plates hang from the upper jaw in a uniquely constructed skull. Amongst living mysticetes, rorquals (Balaenopteridae) are fast-moving "gulp-feeding" predators, while right whales (Balaenidae) are slow-moving "skimmers" and gray whales (Eschrichtiidae) are "bottom-grubbing" filter-feeders. Many mysticetes feed in polar waters, and migrate annually to the tropics to breed. 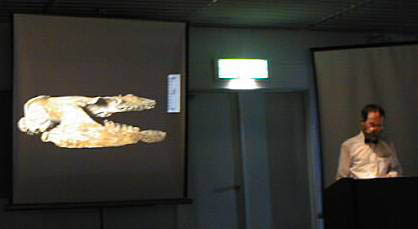 Ewan Fordyce in Japan giving a talk on mysticetes

For years, it was not clear how baleen whales evolved. Recently, the fossil record has provided many insights. Fossils from New Zealand and the margins of the Southern (Circum-Antarctic) Ocean, and from localities around the North Pacific, are particularly important. The oldest southern filter-feeding whales are dated at around 34 Ma (million years old), that is, from the Eocene/ Oligocene boundary. These animals are transitional between extinct archaic whales (archaeocetes) and modern baleen whales. They probably filter-fed using teeth, perhaps assisted by "proto-baleen". At this time, the Southern Ocean was starting to open as a result of continental drift, with changes to climate, water circulation, and oceanic ecosystems. Perhaps mysticetes evolved in response to such oceanic changes.

Mysticetes were quite diverse during Late Oligocene times (23-30 Ma). Toothed mysticetes are known from scattered localities (e.g. Aetiocetus, North Pacific; Mammaldon, Southwest Pacific). Also, by about 30 Ma, the first toothless baleen whales ("cetotheres") had evolved. Like modern species, these had baleen in the thin flat upper jaw and a cylindrical toothless lower jaw, but otherwise they were quite primitive in structure. For example, they had a blowhole nearer the skull tip than in modern whales, the ear region was less advanced, and the neck vertebrae were not particularly compressed. These early baleen whales probably included the ancestors of modern rorquals (gulpers). Other groups of baleen whales, now extinct, indicate early "ecological experiments" which disappeared for uncertain reasons.

During the Miocene (5-23 Ma), "modern" mysticetes diversified. Right whales appeared before about 20 Ma, and rorqual-like animals evolved perhaps by 15 Ma. By the end of Miocene time, and well before our own human-like ancestors walked upright, baleen whales were structurally similar to modern species. Within the last 5 million years, the problematic Cetotherium-group of baleen whales finally disappeared, possibly linked with global cooling. There are no good fossils for two distinctive living baleen whales, each of which is placed in its own family: the gray whale (Eschrichtiidae), and the pygmy right whale (Neobalaenidae).

Some generalisations can be suggested for mysticete evolution. Filter-feeding is a key feature for mysticetes. (Odontocetes don't filter-feed, but are echolocation assisted predators, while archaeocetes show no evidence of filter-feeding or echolocation.) Different families of mysticetes are separated from one another largely in the structure of the feeding apparatus, although it is hard to understand the detailed functional significance of such differences. Most mysticetes migrate into polar waters in summer, to feed on zooplankton. Perhaps migration is a very ancient behaviour which appeared amongst the earliest mysticetes. Because the nature, abundance and distribution of food is governed by global geography and oceanic circulation (e.g. zooplankton is abundant at convergences and the melting ice edge), changes in geography and circulation over geological time have probably played a major role in the evolution and extinction of baleen whales. Fossil hint that rorquals are more diverse than right whales, perhaps because their feeding methods allowed them to exploit more niches. In contrast to odontocetes, mysticetes do not seem to have invaded fresh waters at any stage in their history. Have they had the oceans to themselves? - perhaps, for no other marine mammal group has taken up the lifestyle of filter-feeding.

Ewan Fordyce was appointed to the Geology staff at the University of Otago in 1982. He is currently an associate professor. (His other affiliation is as a research associate, Department of Vertebrate Zoology, Museum of Natural History, Smithsonian Institution.) He teaches paleontology, stratigraphy and related topics, such as microfossils, paleoecology, origins of the New Zealand fauna and flora, evolution, and fossil vertebrates. Originally he trained as a zoologist at the University of Canterbury. His Ph.D. work was followed by a postdoctoral fellowship (to carry out research on fossil whales) in the Department of Paleobiology at the Smithsonian Institution in Washington D.C., and another postdoctoral fellowship in the Department of Earth Sciences, Monash University, Melbourne. This work led to ongoing research on the history and diversity of whales and dolphins, based on living and fossil species from around the world. It also led to study on other New Zealand fossil vertebrates, particularly penguins and reptiles. Fordyce's publications deal with whales and dolphins (stranding, anatomy, paleontology, evolution etc), fossil penguins, and other aspects of the natural history of southern New Zealand.

The material in this page is reproduced from "The Commemorative Lecture of The 9th Study Meeting of the Sea of Japan Cetology Research Group at Marine World Umino-nakamichi in Fukuoka, Japan, June 6-7, 1998" courtesy of the Department of History and Anthropology Kanazawa Medical University