Early stages in extracting the mosasaur: Daniel Thomas is drilling the concretion, assisted by Cushla McGoverin

A recently-discovered fossil from the Waipara area of North Canterbury represents the skull and associated remains of a mosasaur – a large extinct marine lizard - which lived perhaps 70 million years ago late in the Cretaceous. The fossil is one of the most complete mosasaur skulls collected from New Zealand and, for our Cretaceous reptiles, is a "find of the decade." The skull indicates an animal perhaps 5 m long; it is reminiscent of the previously-named Waipara mosasaur Prognathodon waiparaensis, but may be a new species. When the mosasaur was alive, New Zealand was an extensive low-lying land. A small range of dinosaurs lived on land, while a greater diversity of plesiosaurs and mosasaurs swam in surrounding shallow seas.

Mosasaur lower jaw with associated teeth (above) and outline of dorsal surface of skull (below), as exposed in the field

Complete skeletons found overseas indicate that mosasaurs looked somewhat like large crocodiles, but with paddle-like legs and a more sinuous body. Mosasaurs are now extinct. They disappeared along with dinosaurs, plesiosaurs and other animals during the great catastrophic extinction at the end of Cretaceous times – some 65 million years ago. Unlike many of the other Cretaceous large reptile groups, some close relatives of mosasaurs survived the ‘KT’ (Cretaceous-Tertiary) extinction, to give rise to modern snakes and lizards.

Mosasaurs have been found previously in New Zealand, although specimens are not common. The first specimens recognised, in the mid 1800s, came from the Waipara district. Indeed, the Waipara district is one of the most important sources of Cretaceous reptiles in New Zealand. Other mosasaur localities around New Zealand include Shag Point in Otago, Haumuri Bluff in southern Marlborough, and Mangahouanga Stream in Hawkes Bay. The most recent fossil reptiles to be described from Waipara are those documented in 1971, by Dr Samuel Welles (University of California, Berkeley) and Mr Don Gregg (then Curator of Geology at Canterbury Museum). Welles and Gregg named a new mosasaur,Prognathodon waiparaensis, based on a partial skull from Waipara.

The field team at work Daniel Thomas, Cushla McGoverin, Travis Cross. The Pionjar rock drill was used to make holes for the wedges that were used to split the rock

The new mosasaur was found in April 2004, as part of field work on Cretaceous environments of the Waipara area. The fossil was spotted in a deep crack in a large concretion of cemented siltstone. One end of the concretion had split away to reveal a cross section of the skull, a jaw, and some teeth. It was clear that the fossil would be scientifically rewarding so, with permission of the landowner and the farm manager, a recovery operation was planned. It took two trips (of 3 and 4 days), involving 3 or 4 people, to extract the fossil. To remove the fossil from the concretion, we used a petrol-driven rock drill to make holes around the fossil. Wedges were driven into the holes, to split slabs of rock away from the fossil without damaging the specimen. We also used a petrol-driven masonry saw to trim the blocks in the field. These methods reduced the largest block to about 120 kg. Several teams of people moved the blocks on a stretcher, about 800 m to the vehicle.

Because the skull and jaws were nearly in life position, it seems that the mosasaur was buried in quiet conditions after death. The water was sheltered, and perhaps was quite deep. Fossils from nearby sequences, both below and above the horizon of the mosasaur, indicate a clear Late Cretaceous age.

Mosasaur remains described by James Hector in 1874; now known as Taniwhasaurus haumuriensis. Above are vertebrae, while jaws are below

The fossil is from private land in the Waipara area of North Canterbury. Details are not given to protect the landowner's privacy.

The fossil richly deserves to be extracted and studied. Once out of the rock, it will help us to understand the nature of predators in the Late Cretaceous seas of New Zealand. Indeed, the fossil may reveal the way in which ecological niches, or lifestyles, have evolved amongst large marine predators from ancient past to modern days. Because the fossil is fairly well preserved, it may provide details that help to understand the broader classification of mosasaurs.

It will take most of a year to extract the mosasaur. The Department of Geology at Otago has provided a grant to help get work started in 2005. Other support is needed to see the project through. The fossil will be removed from the rock by chipping, and by dissolving the rock with dilute acid. After it is exposed in 3 dimensions, the mosasaur can be studied scientifically. If the fossil is as complete as expected, the original or a high fidelity replica may be put on public display.

At present the part of the specimen is on display at the Geology Museum. 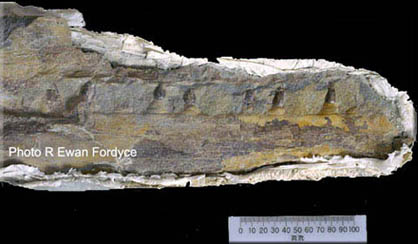 Lower jaw of the new mosasaur. Anterior teeth (to the right) are taller and narrower; posterior teeth, to the left, are lower and more globular