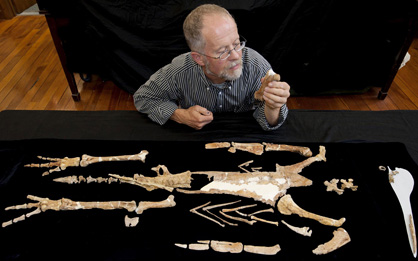 Two new species of "giant" fossil penguin from New Zealand - Kairuku grebneffi and Kairuku waitaki - shed important new light on the biology of early penguins. The new penguins are named in the Journal of Vertebrate Paleontology, by a group working from the Department of Geology at University of Otago. See the bottom of this page for links to related information.

Our two new species of penguins lived in Late Oligocene times, 26-27 million years ago. At least 5 partial skeletons are held in the Geology Museum, University of Otago. All are from a thin rock unit, the Kokoamu Greensand; the main localities are near Waimate in south Canterbury, and Duntroon in North Otago.

On the discoveries . . . "I found the first Kairuku penguin when I was a PhD student, in 1977, on a field trip looking for Oligocene fossil whales and dolphins near Waimate. One distinctive oval bone was exposed - a broken section through the tibia, or lower leg bone. I collected a few fragments, but realised that the fossil was big, and would take some time to collect - and I didn't have the time or money to do more work. Then I went overseas to study.

The penguin stuck in my mind and, when I returned to take up a job at University of Otago, I returned to the site - and found things exactly as I had left them 4 years earlier. So, I excavated the specimen fully. In those days, I used a small pick to excavate, without power tools. It was slow and hard work to recover a block to take back to the lab. My wife Marilyn helped me drag the block down a slope to lift into our car. In the lab, I prepared the fossil from time to time, scraping away at the rock, but progress was slow. Then, two things happened to speed up work on penguins. Firstly, for a project on fossil whales and dolphins, I employed a young geology graduate, Craig Jones, to help prepare fossils. Secondly, by chance, when looking for fossil whales, I found another Kairuku penguin near Waimate. Craig finished preparing the first Kairuku, and then helped collect and prepare the second one. That early work was supported by University of Otago, and by US-based National Geographic Society.

Craig became really interested in penguin fossils, and worked with me to complete his MSc thesis on the Kairuku penguins. At that stage, however, we had not thought of such a name - although we did know that Kairuku was distinct from the earlier-named Palaeeudyptes. Craig moved on to employment, and is now involved in Basin Studies geology with GNS in Lower Hutt, near Wellington.

After a few years, another student arrived to work on fossil penguins - Tatsuro Ando, from Japan. Tatsuro completed a PhD on the systematics and relationships of early penguins, again including Kairuku - this time with other new specimens not earlier available to Craig Jones. With two excellent theses completed by Jones and Ando, I was concerned to get the results out to scientific peers. Dan Ksepka was an obvious choice to "add value" to the Otago-based study, given his important early-career papers on fossil penguins from elsewhere in the Southern Hemisphere. He visited in mid 2009, and we completed the project which is now published in the Journal of Vertebrate Paleontology. All of the authors of the paper were involved in some way with Andrew Grebneff, an exceptional field paleontologist and preparator. Andrew died unexpectedly during the late phase of our work on Kairuku, and we were moved to name one species after him."

Why are these fossils significant? The specimens allow us to reconstruct body form of extinct "giant" penguins, and to estimate size, with more confidence than ever before. Both species were similar in size - calculated by coauthor Dan Ksepka as up to 1.5 metres long when stretched out swimming, and about 1.3 m tall when standing on land. Coauthor Craig Jones estimated the body mass for Kairuku at 60 kg or more. In contrast, today's largest (tallest, heaviest) penguin is the Emperor penguin, which grows to about 1 m high, standing, and up to 40 kg at maximum.

From a distance, living Kairuku penguins would have looked similar to modern species, such as the Emperor penguin. Up close, however, it is clear that both species (Kairuku waitaki, K. grebneffi) had relatively longer bills and a more slender body than in living species. The wing was relatively longer than in living species, and could flex a little more at the elbow. Some of these features are shown in reconstructions by artist Chris Gaskin. The colour in the reconstructions is speculative - although the dark-above and white-belly/underside pattern is a common one in penguins and other marine birds. Other Kairuku-like fossils have been collected in the past, including specimens discussed by the pioneering fossil-penguin paleontologist, Brian Marples. Indeed, the first fossil penguin reported to science - New Zealand's Palaeeudyptes antarcticus - was similar in size and structure to Kairuku. We show in our article that Kairuku and Palaeeudyptes are distinct from one another.

There are several possible explanations for large body size in extinct penguins. Large size could have been an adaptation for long-distance swimming and for deep diving. Studies of marine organisms in general suggest that bigger forms can swim more efficiently than smaller forms - and thus might be able to feed on rich food resources further from land. Alternatively, large size might have been an adaptation against large predators.

We expect that Kairuku penguins could swim far out to sea, beyond the limits of the wide shallow seas of Zealandia, then dive into deep water to search for prey. Prey was likely small fish and squid. The long beak would suggest a spearing/ snapping behaviour. But, we do not know exactly which prey were preferred, or exactly how the beak worked best. In turn, the penguins could have been hunted by early dolphins, especially forms with short, robust, and heavily toothed jaws - like some species of shark-toothed dolphins, Squalodontidae. Sharks may have taken Kairuku penguins. Seals and sea lions are unlikely predators or competitors, for at that time, 28 million years ago, there were probably no such animals around Zealandia.

New Zealand has a rich fossil record of penguins. For much of its history, New Zealand - and its precursor Zealandia - sat on the margin of the Southern Ocean, the sea that circles Antarctica. For millions of years, Zealandia provided suitable land for rookeries (breeding grounds) and access to rich food resources in nearby seas. More broadly, New Zealand preserves thick sequences of marine sedimentary rocks back beyond 80 million years, spanning Late Cretaceous and Cenozoic times. Those rocks are now uplifted and accessible on land. As a result, New Zealand has an excellent record of marine fossils - penguins, and other forms of marine life.

The Kairuku penguins are related to "modern" penguins, but are a side branch rather than truly on the lineage leading to modern forms. The fossil record of Kairuku and many other extinct forms shows that true "modern" penguins (technically, crown penguins) did not appear until much later in time, perhaps 15 million years ago. That observation on fossils conflicts with the predictions about penguin history based on patterns of molecules from living species. The molecular studies suggest that "modern" penguins arose as long as 40 million years ago. The fossil record, however, does not support the idea of such ancient evolution for truly modern penguins.

To consider penguin origins, the oldest penguin named so far is Waimanu, also from New Zealand. It lived in Paleocene and earliest Eocene times, perhaps 55-60+ million years ago, not long after the extinction of dinosaurs. Waimanu had wings that could fold more than those in living penguins, but it could not fly in air - it was a wing-propelled diver that "flew" under water.