In 1949, Otago U. zoology professor Brian J. Marples excavated a fragmentary baleen whale skull with earbones and some cervical (neck) vertebrae from 25-27 million year old Kokoamu Greensand at Kokoamu Cliff in North Otago (east of the town of Duntroon). He had collected a more complete skull and partial skeleton from the same outcrop in 1942, and he thought these were closely related to the fossil baleen whale Mauicetus parki, named a decade earlier by Professor William Benham from similarly aged rocks near Milton. In 1956 Marples formally named these two fossils. The more incomplete specimen of which was given the name Mauicetus waitakiensis, and the other Mauicetus lophocephalus. Due in part to New Zealand’s isolation from most paleocetologists in the 20th century, little attention was given to these fossils.

Labelled photographs of the skull (left) and tympanic bulla (right) of Tohoraata waitakiensis, from Boessenecker and Fordyce (2014).

Later during the 20th century it became clear that the majority of fossil baleen whales were somewhat modern in skeletal anatomy and relatively young – most were from the Pliocene (~5-2 million years ago, mya) and Miocene epochs (~25-5 mya). In contrast, archaic whales, known as archaeocetes (most of which retained functioning or rudimentary hindlimbs among other features hinting toward terrestrial ancestry) were primarily Eocene in age (~50-35 mya). The great morphological gap seemed to be caused by a worldwide rarity of fossil cetaceans from the Oligocene epoch (~35-25 mya). Since the late 1980’s, considerable efforts have been made to discover new fossil cetaceans from the Oligocene in order to better understand the early evolution of baleen whales (Mysticeti) and toothed whales (Odontoceti; dolphins, sperm whales, and beaked whales). Mauicetus waitakiensis has been known to date to the Oligocene since it was discovered, but unfortunately its incompleteness hindered attempts to ascertain its role in baleen whale evolution. Further making this fossil a problem was that in the 1960’s, the skull of Mauicetus lophocephalus was lost, limiting meaningful comparisons between the two species.

In 1993, Otago U. Geology professor R. Ewan Fordyce, along with Richard Kohler, Craig Jenkins, and the late Andrew Grebneff, discovered and excavated a partial skull (University of Otago Geology Museum specimen 22178) with well-preserved earbones, partial mandible, ribs, and a vertebra from the Otekaike Limestone at Waipati, southwest of the town of Duntroon. This fossil turned out to have similar earbones (tympanic bulla) with Mauicetus waitakiensis, but the rest of the skull is very different from Mauicetus parki – indicating that the species described by Marples (1956) needs to be allocated in a new genus. Instead, the skull of the new specimen is very similar with a more archaic baleen whale, Eomysticetus, described in 2002 from similarly aged Oligocene rocks in South Carolina, USA. 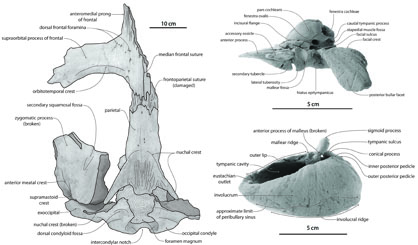 The more recently collected fossil was named in November 2014 (Boessenecker and Fordyce, 2014) as the new genus and species Tohoraata raekohao, which is a member of the family Eomysticetidae. Tohoraata – and other eomysticetids – have a very small braincase and large cavities and attachment surfaces for jaw closing muscles and primitive earbones. Other eomysticetids, including more complete material from other nearby localities in North Otago, have long snouts and appear to have lacked teeth, and thus reflect the first toothless baleen whales to have ever evolved. Tohoraata is unique in exhibiting a series of holes (foramina) for arteries above its eye sockets, hence the species name raekohao, which translates to “holes in the forehead” in Māori. The genus name means “dawn whale”, and refers to the ancient age and anatomy of this extinct whale. Similarities in the earbones mean that Mauicetus waitakiensis can be allocated to the new genus Tohoraata, and it is now known as Tohoraata waitakiensis. The two species are separated in time, with Tohoraata waitakiensis being somewhat older (27-26 mya) than Tohoraata raekohao (26-25 mya), and the former may be a direct ancestor of the latter.

The discovery of Tohoraata raekohao ends nearly 60 years of confusion about the identity of Tohoraata waitakiensis. Perhaps more importantly, these fossils are the first records of eomysticetids from the Southern Hempisphere, and demonstrate that the Eomysticetidae were probably worldwide in distribution, as they are now known from North America, Japan, and New Zealand.

This study formed part of Robert Boessenecker’s doctoral thesis in the University of Otago Department of Geology, and was funded by a University of Otago Doctoral Scholarship and Tohoraata raekohao was collected during fieldwork supported by a grant from the National Geographic Society. 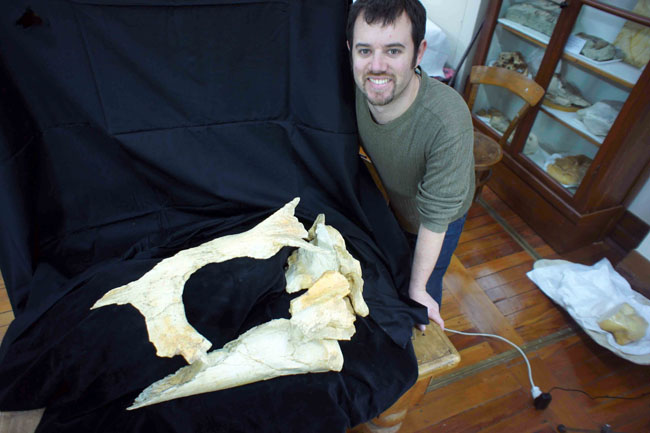 Models were generated using Agisoft photoscan Pro using ~200 images for each model shot on a DSLR camera by Bobby Boessenecker. Units for 3d models are in Meters. Since a lot of 3D software is unit-less you may need to scale the mesh to get the correct size. Please contact luke.easterbrook@otago.ac.nz for additional information concerning the models. Two file formats are supplied: