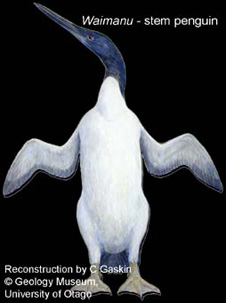 The reconstruction shown here, by Chris Gaskin, is © Geology Museum, University of Otago.

An online article recently published in the journal Molecular Biology and Evolution (March 2006) recognises a new genus of ancient penguin (Waimanu) from New Zealand rocks some 60-62 million years old. The ancient penguins lived in shallow seas off eastern New Zealand in Paleocene times, only a few million years after the extinction of dinosaurs. These "proto" penguins were about the size of living yellow-eyed penguins. They probably looked a bit like shags (cormorants), but had compressed and dense wing bones, allowing wings to be used to swim underwater. It is most unlikely that the Waimanu penguins could fly in air. These fossils are a little older than archaic penguins from Tierra del Fuego, documented by Dr Julia Clarke and coauthors (2003), and are the oldest fossil penguins reported from New Zealand.

Because the Waimanu penguins are well dated in terms of geological age, it is possible to use that known age to calibrate a new molecular phylogeny - or pattern of relationships - for living birds. The phylogeny shows a branching pattern of bird relationships based on study of genetic material from a range of living birds such as storks, albatrossses, ducks and moas. By using the dates from the fossil Waimanu penguins as a calibration point, we can then predict how far back in time the other groups of living birds originated. If early penguins lived in southern seas not long after the extinction of dinosaurs, then other bird groups more distantly related to penguins must have been established even earlier. 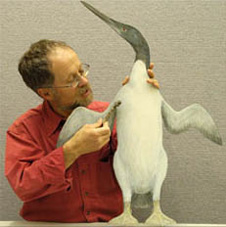 Ewan Fordyce shows the position of the humerus, or upper wing bone, on a reconstruction of Waimanu tuatahi

The study suggests that many groups of living birds originated well back in Cretaceous times, when dinosaurs were thriving - thus, many modern lineages had ancient origins. Such a notion conflicts with an idea suggested by Professor Alan Feduccia (1995, 2003), who suggested that many living bird groups are geologically young, and mostly represent groups that arose after dinosaurs went extinct.

Feduccia argued that most birds from Cretaceous times - from the age of dinosaurs - were ancient lineages not related to living forms. He suggested that those ancient bird groups disappeared, along with dinosaurs, in a turnover at the catastrophic "KT boundary" extinction 65 million years ago. Feduccia also suggested that there was a complete new evolutionary radiation of "modern" birds following the KT extinction. 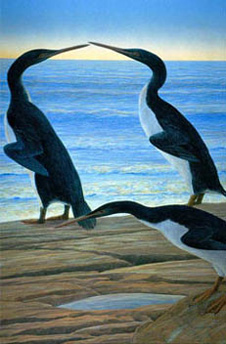 Now, the new study which combines fossils and molecular approaches, predicts that "modern" birds thrived in the age of dinosaurs. We expect that the fossil record will continue to produce the hard evidence of those birds.

Details of title and authorship

The first specimen of Waimanu was found in the 1980s, by Brad Field (then of NZ Geological Survey), and was passed to Ewan Fordyce for study. Craig Jones prepared the specimen - now curated in the Geology Museum of University of Otago - while working for Fordyce as a technician. Fordyce and Jones (1990) later published some details of the first fossil. Subsequently, Al Mannering (of Christchurch, affiliated with Canterbury Museum) discovered more Paleocene penguins (Jones and Mannering 1997) which Mannering prepared; those fossils are curated in Canterbury Museum, Christchurch. Most recently, the Waimanu fossils have been studied in detail by Geology graduate student Tatsuro Ando, as part of his PhD studies at University of Otago. Al Mannering's sterling efforts of collecting and preparation are honoured in the name of one of the species, Waimanu manneringi.