Only a few dolphins have been described from rocks of Oligocene age, about 23-34 million years ago. One of these is the species Waipatia maerewhenua, which was named in 1994. The only reported specimen is a skull and associated bones and teeth from North Otago, near 45 degrees south in New Zealand.

The dolphin was recognised when an earbone and some teeth were found in an outcrop of limestone. Ewan Fordyce, Andrew Grebneff and Bob Connell spent 2 days excavating the fossil, to reveal a skull lying upside down, with the upper jaws crossed over the skull. Many loose teeth were found, along with more ear bones and a few fragments of bones from the skeleton behind the head. In the laboratory, it took Andrew Grebneff several months to excavate all the bones from the rock.

Waipatia has a well-preserved skull about 600 mm long; the picture shows a lateral view of the right side. There is a long and broad-based snout, small triangular teeth, and a slightly asymmetrical facial region. The eyes lay on the side of the skull, below the face. Above the eyes, the facial region, which is distinctly basined either side of the blowhole, held muscles which probably helped to produce high-frequency echolocation sounds. Each lower jaw has an extensive region of thin bone, the "pan bone," towards the back, near its joint with the skull. In life, the pan bone was probably filled with fatty tissue which helped transmit sound from the side of the head towards the ear region. All these features indicate that Waipatia is related to the living toothed whales, dolphins and porpoises – the suborder Odontoceti.

Waipatia is from the Otekaike Limestone, a marine deposit which formed on the continental shelf during the late Oligocene (NZ Waitakian Stage), about 24-25 million years ago. At this time, most of New Zealand was submerged, with no sign of the mountains that characterise the country today.

Waipatia helps solve some broader problems of dolphin classification and history. For more than a century, small dolphin teeth have been known from Oligocene rocks around the world. One of the first-recognised species is Microcetus ambiguus, based on teeth found in Germany. Because of some features of their teeth, he first time, Waipatia shows the sort of skull to which such small teeth belong. It is clear now that these small Oligocene dolphins do not belong in the family Squalodontidae. Indeed, Waipatia characterises a new group of odontocetes, the family Waipatiidae. This family is related to, but distinct from, the extinct Squalodontidae, and it appears to be distantly related to the endangered living Ganges dolphin Platanista gangetica.

The unique specimen of Waipatia maerewhenua is catalogued in the Geology Museum, University of Otago. It is on temporary loan to Otago Museum, Dunedin, and may be seen in the Southern Lands, Southern People gallery. A cast and interpretive graphics are displayed at the Vanished World Centre, Duntroon, North Otago.

Waipatia maerewhenua was collected during field work supported by the National Geographic Society. For another photograph of the specimen, see http://www.nationalgeographic.pt/revista/1101/feature5/zoom2.asp

Technical details are in the original article on Waipatia. Reprints of the article are available by request, email ewan.fordyce@otago.ac.nz or Fordyce 1994 Waipatia v2.pdf 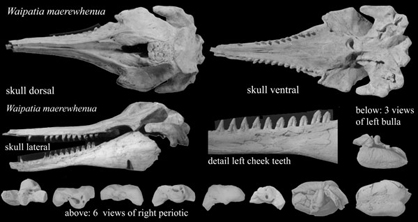