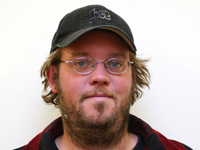 The largest and most destructive volcanic eruption which New Zealand has experienced in historical times was the Tarawera-Rotomahana eruption of June 10th 1886.  The eruption took place from an ~16 km long series of en echelon dikes which cut across Tarawera Mountain (Wahanga, Ruawahia and Tarawera rhyolitic domes from northeast to southwest respectively) for 7 km, then extended another 9 km southwest through the pre-existing, intensely active Rotomahana hydrothermal field and Waimangu Valley (Fig.1) (Nairn, 1979; Nairn and Cole, 1981; Walker et al., 1984).  The location and trend of the fissure is not surprising, as it lies within the Tarawera linear vent zone, a 5 km wide linear series of eruptive vents trending 057 degrees which appears to be controlled by a deep-seated basement fracture, along which all eruptions from the Tarawera Volcanic Complex have taken place (Nairn, 1989).  The eruption was an unusual one in the fact that the magma erupted was basaltic as opposed to rhyolitic, the predominant magma erupted from the Okataina Volcanic Center, in the Taupo Volcanic Zone.  Other unusual aspects of the eruption include the fact that it is one of the only and most recent examples of both a basaltic plinian eruption, and a plinian eruption taking place from a fissure as opposed to a point source.  Despite the fact that the erupting magma was basaltic, the eruption was nonetheless exceptionally powerful and an extensive scoria and ash fall accompanied the eruption, reportedly falling more than 230 km east of the fissure and covering an area >10,000 km2  (Thomas, 1888; Walker et al., 1984). 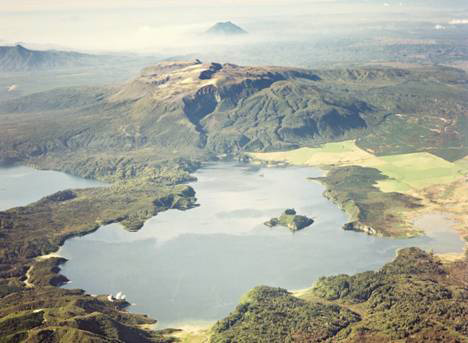 Fig. 1. Aerial view of Tarawera Volcanic Complex and Lake Rotomahana looking down the trend of the 1886 fissure. The en echelon nature of the eruptive craters is evident in the photo. Mt. Edgecumbe situated behind the Tarawera Volcanic Complex is an andesite/dacite cone which also lies on the Tarawera linear vent zone. Note the steaming cliffs at the shore of Lake Rotomahana the bottom left of the image.

The section of the eruptive fissure which cut across Tarawera Mountain comprises 13 major craters containing more than 50 vents which were determined by previous authors to be the source of the main magmatic eruptive events (Nairn and Cole, 1981).  For some time it has been thought that the segment of the fissure which cut through the Rotomahana hydrothermal area was mainly a site of repeated phreatic explosions (due to the interaction of water from the hydrothermal system with rocks heated by the rising basaltic dikes) and that little or no basalt was erupted from this segment of the fissure (Nairn, 1979).  Explosions taking place from the Rotomahana segment of the fissure excavated a series of large, coalescing maar-type craters through the highly altered rock of the geothermal system, which have filled with water to create the modern day Lake Rotomahana.  The number of vents located in the Rotomahana section of the fissure is speculative as the craters formed began to fill with water almost immediately after the end of the eruption (Fig. 2).  The deposits from the two segments of the eruptive fissure varied greatly, with the Tarawera portion producing mainly basaltic scoria with few lithics, while the Rotomahana portion ejected mainly a wet mix of conduit wall rock and lake-floor sediments, known as the Rotomahana Mud (Nairn, 1979). A series of base surges from the vents at Rotomahana swept over the surrounding landscape, traveling over topographic features 350 meters above the vent and traveled as far as 6 km from their source (Nairn, 1979).  While many authors have now addressed the basalt-dominated Tarawera portion of the eruption, the large crater-forming Rotomahana portion has been relatively unstudied.

A major block of work for my Ph.D. thesis will involve taking a look at the energetics and thermodynamics of the eruption based on the volumes of material ejected, the state of the erupted debris, the amount of water involved in the eruption, and the volume of magma erupted from the Rotomahana section of the 1886 fissure.  The pre-existing geothermal field at Rotomahana was described by early authors to be one of the, if not the most intensely active systems in all of New Zealand, and was home of the internationally renowned Pink and White Terraces (Fig. 3), which were subsequently destroyed by the eruption (Hochstetter, 1864). Nairn (1979) inferred that heat from rising basaltic dikes triggered phreatic explosions in the highly active hydrothermal system and that was why this segment of the fissure erupted so violently.  However, an eruption into a geothermal field wouldn’t necessarily be more explosive than, say, an eruption into a shallow lake or the ocean. For instance, any water vapor in the geothermal system could not significantly expand upon contact with magma, unlike liquid water. Also, I suspect that geothermally heated water, rather than cool meteoric water, will have a negligible influence on the explosivity of Molten Fuel-Coolant Interactions (MCFI) because in the temperature change from ambient to magmatic, whether the water (coolant) is 20 or 100 degrees Celsius, when contacted by magma (molten fuel) of 1200 degrees Celsius, the difference in the much cooler water temperatures just isn’t significant.  There are plenty of things to consider in quantifying the eruption's energetics, and that's one of the parts of the project that I'm really interested in working on. 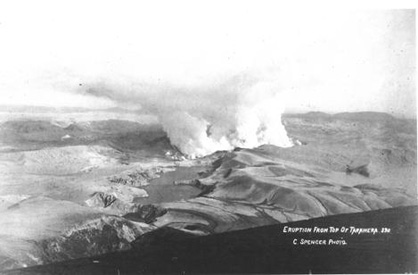 Fig. 2. View of the Rotomahana segment of the fissure 18 days after the eruption from the top of Tarawera dome. Again, the en echelon system of craters can be observed. The elongate lake in mid-ground is the newly formed Rotomakariri, occupying the site of Rotomakariri and Banded Island Basins, two localities of phreatomagmatic explosions during the 1886 eruption. In the background is the steaming Great Crater Basin, largest of the 1886 Rotomahana explosion craters and former site of the geothermal field.

As mentioned above, Nairn (1979) regarded the Rotomahana eruption as a phreatic event, involving little to no magma.  He did recognize basalt in the deposit but considered it a minor component derived from fallout from the plume rising from Tarawera to the northeast.  A close look at the deposits however, shows that basalt is pervasive throughout, albeit in varying percentages, and showing varying textures, colors, densities and grain size.  This means that the eruption was phreatomagmatic as opposed to purely phreatic (although there was probably a phreatic component due to the rupturing of the hydrothermal system and the instant flashing to steam of superheated geothermal fluids).  That being the case, another major block of work will involve the sorts of techniques that Dr. Bruce Houghton and others have been using for other basaltic eruptions.  Techniques such as textural analysis of vesicle and microlite populations, new views of particle morphology, Fourier transform infrared (FTIR) spectrometry for determining the glass volatile content, and so forth.  This will show quite a bit about the state of the magma at the time it was erupted, but it won't directly explain how the large maar-type craters now filled by Lake Rotomahana were formed, and it can't directly address the large proportions of non-juvenile material that dominate the deposits.

It would also be worthwhile to take a careful look at the detailed morphology of the pan fraction of the juvenile particles, because if they're sufficiently well preserved it might be possible to see if there are any of the particles some authors consider to be the "smoking gun" for explosive magma-water interaction (Buettner et al., 1999).  It may also be possible to use XRD analysis on the pan fraction to determine the state of alteration of the ejected (mostly rhyolitic) wall rock, and to determine the depth of fragmentation based on the degrees of alteration. Finally, providing that enough outcrops can be found which still preserve features characteristic of base surge transportation (cross-bedding, dunes, pinch and swell structures) it would be interesting to determine the depositional processes of the Rotomahana base surges.

A series of stratigraphic logs has been created of proximal outcrops.  Variations up-section as well as an inability to correlate layers laterally along the lakeshore attest to the extreme complexity of the deposit as a whole, being erupted from several sources with varying fragmentation depths and involving varying amounts of magma and water.  The intermingling of deposits from each eruptive center along the Rotomahana segment of the fissure most likely also adds to the complexity of the deposit as a whole.  Preliminary grain size analysis supplemented with Coulter counter analysis of particles smaller than 1 phi tends to show a distinct bimodality in the southwestern deposits, representing the two main origins of the Rotomahana Mud in that region, namely fragmented country rock and hydrothermal clays.  The deposits in the northeast, while still retaining a large portion of ultra-fine grained material, seem to lack this definitive bimodality in the Coulter analysis, reflecting a lack of hydrothermal clays available for disruption and entrainment.  Overall grain size analysis shows the deposits to be poorly to extremely poorly sorted and there is a tendency to be positively skewed, due to the characteristic fine grain size of phreatomagmatic eruptive products.  Preliminary componentry also seems to show variation in the deposit from the northeast to the southwest, reflecting varying intensities and styles in the eruptive vents as well as in the wall rock material ejected. 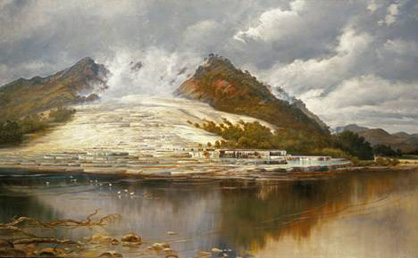 Fig. 3. Artist depiction of the famous White Terrace of Rotomahana as it appeared before the eruption in 1886.