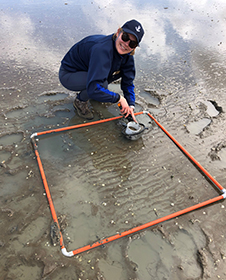 Aless is currently working for the Northland Regional Council in Whangarei as a marine biosecurity officer. The role incorporates elements of monitoring, compliance and working with communities to educate them about marine biosecurity.

For her masters’ research, Aless assessed the quality of ecological data collected by citizen scientists (in this case local students) on the rocky shore in the Otago Harbour as well as looked at the educational outcomes of this programme. During this time, she developed not only practical environmental monitoring skills but was also required her to communicate not only her research findings to both the general public and the science community which naturally led into becoming a marine educator at the New Zealand Marine Studies Centre. She was particularly involved in the Marine Metre Squared project, which encourages the public to document the biodiversity living on their local shore.

Aless utilises these skills while engaging with local communities to promote awareness about marine biosecurity through monitoring programmes and educational resources. Some of these communities are also working alongside other research institutions to supplement their knowledge on how to manage marine pests. Additionally, Aless takes part in regular surveys inspecting the underside of vessels for marine pests to monitor their spread and impact in the Northland Region. This allows her to upkeep her diving, something she thoroughly enjoyed doing during her time as a postgraduate student. 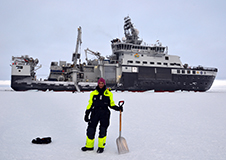 Nadjejda is currently working as a postdoctoral research fellow at the Norwegian Polar Institute as part of the Nansen Legacy Project, where she investigates the responses of lower trophic levels in arctic ecosystems to stressors of anthropogenic origin (such as ocean acidification, alone or in combination with other stressors). 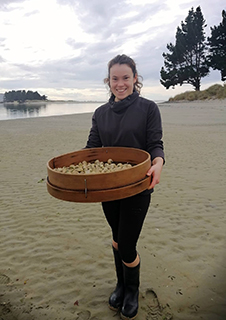 Following her Master of Science in Marine Science focusing on estuarine ecology, Nichola began working at NIWA in Hamilton, as a Marine Ecology Technician. As part of this role, she works alongside scientists and other technicians to collect, process and analyse an array of environmental samples that help to inform councils and scientists about the health of coastal ecosystems and how they are changing spatially and temporally. This work helps to determine how what we do on land affects our estuaries and harbours. Hands-on application of theoretical concepts through fieldwork and laboratory experiments undertaken during her BSc and MSc at Otago, gave her valuable skills which can be applied directly to her role as a Marine Ecology Technician.