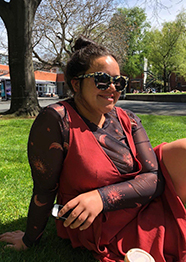 My Masters thesis aims to develop a theory that sheds light on the viewing processes that the bicultural audience employs when consuming cinematic texts. Using qualitative approaches and an ethnographic methodology, I aim to provide insight regarding how the bicultural audience engages with mainstream films that rarely represent their experiences as New Zealanders, whose identities are informed by two different cultural knowledges and etiquettes.

Born in Auckland and raised in Dunedin, Amie completed a BA majoring in English Literature and Media and Film Studies in 2014. In 2015, Amie completed a BA(Hons) majoring in Media and Film Studies, which included a dissertation entitled Bicultural Analogies in the Harry Potter Series: Understanding Negotiated Space in The Philosopher's Stone (2001) and Half-Blood Prince (2009), before backpacking through Thailand, Europe and the United States in 2016. Amie's areas of academic interest include audience reception, National cinema and Independent film.