Simulated case scenarios jointly run by staff from the Anaesthetic Department at Christchurch Hospital and the Simulation Centre provided valuable opportunities for teams made up of senior anaesthetists, registrars training in anaesthesia, anaesthetic technicians and nursing staff to work together to manage two cases involving potentially life-threatening complications of anaesthesia.

On every occasion, SimJunior was successfully managed by the teams.

This training day was deemed very enjoyable and successful by all participants and will be held again at the Simulation Centre in 2013. 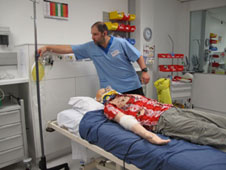 This session was joint collaboration between the Centre and the Anaesthetic Department at the Christchurch Hospital.

The scenario gave Centre staff a chance to put their moulage skills to work in producing injuries, including severe burns, suffered by Alex as a result of a boating explosion. 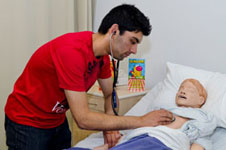 The UOC Simulation Centre is excited to introduce the newest member of their simulation family, SimJunior, aka "Charlie". Charlie is an interactive paediatric simulator which mimics a 6 year old child.

It has the ability to be intubated, it breathes, has a pulse, heart, lung and bowel sounds, can be used with ECG-monitoring and has the latest software for programming, controlling and recording scenarios.

Charlie is a valuable addition to the sophisticated equipment used at the Simulation Centre to provide students with the opportunity to practice their clinical skills and participate in scenarios in a realistic and safe environment. 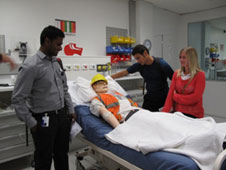 After a disruptive year in which our building was closed for the second half of 2011, the UOC Simulation Centre re-opened for teaching in February 2012 - in time to host the 4th Year students during their Introductory Fortnight.

Students were introduced to the Simulation Centre, including the human simulator "Alex", and tried their hand at venepuncture using some of the part-task trainers they will be using for Clinical Skills sessions during their next three years at the Christchurch Campus. 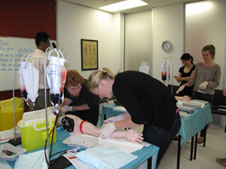 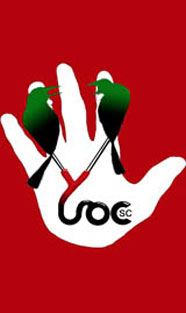