Introduction to the NZ-ITC Study

In October 2015, ASPIRE2025 researchers were awarded funding by the Health Research Council to initiate a new cohort of the New Zealand arm of the International Tobacco Control Policy Evaluation Project (the NZ-ITC Project). The NZ-ITC Project aims to provide evidence to inform policy and strategy development for the Smokefree Aotearoa 2025 goal. The project adds to evidence developed in a previous HRC-funded NZ ITC study led by Professor Nick Wilson from 2006-2010 and is part of a highly successful and influential international collaborative study led by the University of Waterloo in Canada. 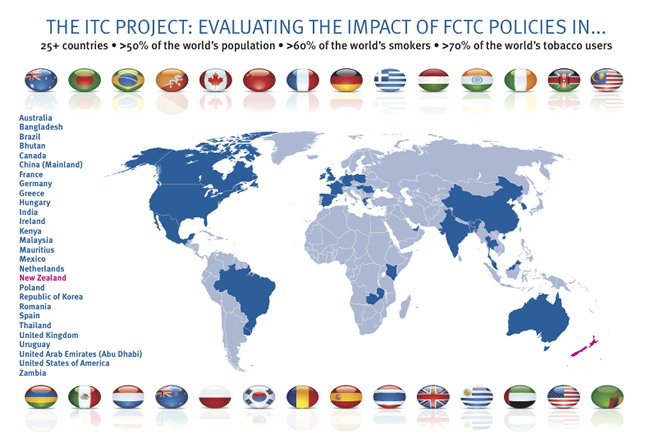 The ITC Project is a transdisciplinary collaboration of over 150 researchers across 29 countries. The dual mission of the ITC Project is to predict and understand the factors that are responsible for tobacco use in each of the 29 countries, and to conduct rigorous evaluation of the psychosocial and behavioural effects of national level tobacco control policies of the WHO Framework Convention on Tobacco Control (FCTC), the first-ever international treaty on health, as they are implemented in the participating countries.

In all, the ITC Project has conducted prospective cohort surveys of tobacco use to evaluate FCTC policies in countries inhabited by >50% of the world’s population, >60% of the world’s smokers, and >70% of the world’s tobacco users and is playing a leading role in establishing the evidence base for the FCTC and for other tobacco control policies and regulations. The ITC Project is the only research project in the world that focuses explicitly on measuring and understanding the population-level impact of the FCTC and tobacco control policies and regulations more generally.

What are the objectives of the NZ-ITC Study?

The aim of the NZ-ITC Study is to establish a cohort of New Zealand smokers and ex-smokers and interview them over several years in order to:

The NZ ITC Study recruited a cohort of approximately 1000 adult (≥15 years old) current smokers and ex-smokers. Around 350 of the sample are Māori. The cohort was recruited from participants in the NZ Health Survey (a cross-sectional survey administered by the Ministry of Health).

What data has been collected?

We have collected a wide range of information on smoking and potential determinants of smoking-related behaviours like quitting and relapsing, and indicators of the impact of tobacco control interventions such as increases in tobacco excise tax. We included NZ-specific questions to explore relevant facets of smoking among Māori (e.g. greater use of roll-your-own tobacco) and have assessed awareness, support and impact of NZ-specific interventions and policies.

When is the study taking place?

There have been two waves of data collection: the first was completed in April 2017 and the second occurred in the second half of 2018.

The NZ ITC study has continued as the EASE project. Further information about this study is available here: EASE study 2020-2024

Who is the research team?

What will be the impact of this research?

The NZ-ITC Project has advanced knowledge about smoking and tobacco control interventions that may help to achieve the Smokefree Aotearoa goal, and hence reduce the impact that smoking has as a major determinant of poor health and mortality, as well as reducing the impact of smoking as a driver of health inequalities in NZ. Outputs from the NZ-ITC Project have been widely disseminated to the tobacco control and policy sectors, and will include findings about patterns and determinants of smoking-related behaviours, impact of national tobacco control policies and interventions, feasibility of new innovative interventions, and attitudes towards Smokefree Aotearoa 2025 and key tobacco control policies.

What outputs are now available?

To view presentations, reports and other outputs resulting from this study, please view Outputs from the International Tobacco Control (ITC) Project 2016-2020 - New Zealand

If you are a participant in this project, please go to (Research New Zealand page) for more information.

For more information about the NZ-ITC Project please contact richard.edwards@otago.ac.nz or any other member of the project team.