Rafting Communities in the West Wind Drift: The Importance of Buoyant Kelp

Our recent publications on oceanic rafting

This new direction in southern marine biology was conceived when two evolutionary research programs at the University of Otago (Department of Zoology) independently revealed dramatic evidence of long-distance rafting in marine invertebrates. First, Jon Waters and Mike Roy's work on the biogeography of sea-stars revealed closely related populations of the sedentary Parvulastra exigua on far-flung continents and oceanic islands of the Southern Hemisphere (Waters & Roy, 2004) (Fig. 1). They concluded that this wide geographic distribution could only have arisen through a number of independent rafting events. Simultaneously, Kirsten Donald and Hamish Spencer's phylogenetic research on trochid gastropods (Fig. 2) indicated that the topshell Diloma nigerrima recently migrated across the Pacific Ocean, from NZ to Chile, probably by rafting on fronds of the buoyant bull-kelp, Durvillaea antarctica (Donald et al 2005). 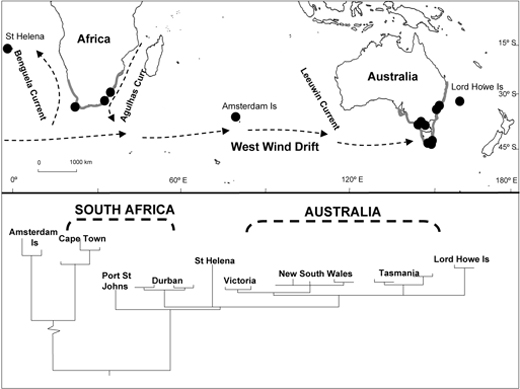 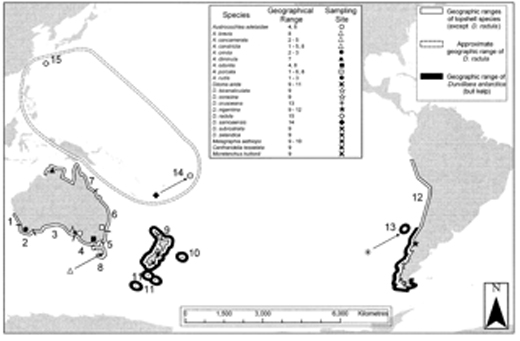 Biologists have been speculating about the origins of such widely dispersed marine species ever since Darwin noted the broad distribution of giant kelp (Macrocystis). Following the development of plate tectonic theory in the late 1960s, however, the view that species distributions are driven chiefly by geological — rather than biological — processes has held sway among many biogeographers, even today. Now, in light of dramatic new evidence for long-distance rafting (Parvulastra; Diloma: Figs 1-2), the time is right to put biology back into biogeography. We hypothesise that rafting may be a far more common and important biological phenomenon than is currently realised. Only by focusing on a whole community, and one that has an ecological propensity for long-distance dispersal, can we rigorously assess the evolutionary significance of this fundamental process. 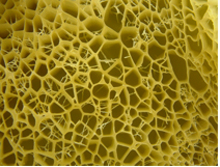 A unique southern system for this work is bull-kelp. Exposed Southern Ocean coastlines are typically characterised by dense bull-kelp 'forests' (Durvillaea). As D. antarctica is both robust and buoyant (Fig. 3), detached plants form natural rafts that may float for vast distances. 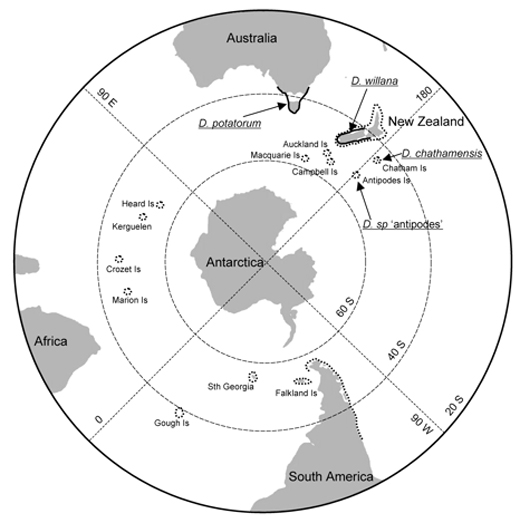 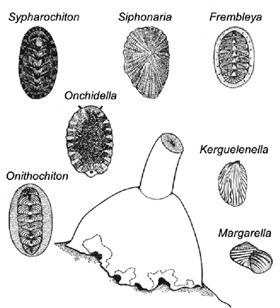 Indeed, the Southern Ocean has an estimated 70 million kelp rafts at any one time (Smith 2002). In addition to the buoyant honeycomb-bladed D. antarctica, which has a circum-subantarctic distribution (NZ, Chile, and subantarctic islands; Fig. 4), the genus includes a number of solid-bladed (non-buoyant) species that are geographically restricted (Fig. 4), allowing a number of natural comparisons to be made, for example, about the respective population structures of buoyant and non-buoyant kelps and their constituent communities. In addition, our recent research indicates that D. antarctica represents a complex of at least two buoyant taxa (Fraser et al, submitted), increasing the scope for multiple independent comparisons.

Durvillaea kelp 'forests' support exceptionally high invertebrate biodiversity. It has been hypothesised that these highly specialised kelp holdfast communities — akin to a host-parasite system — raft together across the far-flung parts of the Southern Ocean. 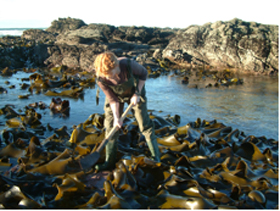 This project aims to examine the importance of rafting by focusing on an entire marine community that has rafting potential (Figs 5-7). If one is to attempt to study rare biological events — such as long-distance rafting — one should at least maximise potential success by looking at species that have an ecological propensity for such rafting. In this research program, therefore, we outline a new direction for phylogeography, one that integrates both ecological and historical biogeographic perspectives, and which involves genetic analysis of kelp and its associated rafting invertebrate communities. We will assess the evolutionary importance of rafting using a variety of approaches.

We will compare levels of population genetic structure in buoyant versus non-buoyant sister taxa of kelp (Durvillaea antarctica versus D. willana) together with kelp-associated invertebrates versus their non-rafting sister taxa (e.g. Sypharochiton sinclairi versus S. pelliserpentis). The correlation between buoyancy and geographic range of Durvillaea species is, in itself, circumstantial evidence for rafting as a dispersal mechanism for D. antarctica, but genetic data are required to make this claim robust. We will also use genetic analysis to quantify the frequency and duration of rafting events, and analyse the effect of ocenaography on marine connectivity.